The most important job of my life was managing a tuxedo shop at a strip mall in Skokie, Illinois. You’re probably thinking, “That has to be one of the most depressing jobs ever.” And you would be absolutely right. But that job changed my life.

When I was a kid, I was “Peter Perfect.” I stayed out of trouble and followed all the rules. I was even valedictorian of my high school class. So when it was time for college, I did what kids like me are supposed to do. I got into a good school—Northwestern University—and pursued a career in finance.

By senior year I was graduating with a degree in economics and it was time to start interviewing with banks and consulting firms. There I was, in my little interview suit, meeting other guys in their little suits. After a few rounds, I started to feel a sickening pain in the pit of my stomach.

I didn’t like these people. I did not belong in their world. After all these years of doing what I was supposed to do, I began to realize that I had made a colossal mistake.

But what now? It was time for some major soul searching. I started to review my life in detail, trying to find anything that I had been passionate about. Maybe I could figure out what I was supposed to be doing—all the while fearing that I was going to have to start over.

As I went through my past, things started to jump out. Playing piano, painting, drawing, reading about architecture and designing my own homes—everything I loved was creative!

I then had a revelation: If I was going to be happy in this life, I needed to be in a creative world.

During college I had a part-time job working in the men’s department at I. Magnin, a high-end specialty store. Soon after my big revelation, my department was invited to a fashion show by my all-time favorite designers, Marithé and François Girbaud. I was in love with their brand. The clothes were amazing: modern, edgy, architectural. During slow hours at the store I used to try on the latest collections, and would even turn the clothes inside out to understand how they were made.

I jumped at the chance to go to the fashion show. It was at the Limelight nightclub in downtown Chicago, so I put on my club clothes (it was the 80s, so I think parachute pants and an officer’s hat were involved) and headed out. I ended up being the only one from my store to show, but as I was hanging out by myself I met this guy named Ron Smith. He turned out to be the head of marketing for Girbaud! We hit if off immediately, and I soon learned that they had a job opening in New York. Ron said I should interview for it, so I flew myself to New York, had the interview, and then waited. Days turned into weeks, until I finally got a call.

They had gone with someone else.

It was devastating. I was so depressed that at one point I seriously thought about driving my car into Lake Michigan. Fortunately, I got over it and enrolled in some design courses at Chicago’s version of FIT to at least try to pursue this new dream. I wasn’t making any real progress though and after a year with no job prospects, I ended up, in desperation, taking a job with a tuxedo shop in a strip mall in Skokie. That’s when everything changed.

On my second day at the tux shop, the store manager from I. Magnin walked in. He was getting fitted for a tux for a wedding.

“Kevin!” he said with surprise. “Did you know that Girbaud is trying to reach you?” I had no idea, but I tracked down Ron Smith as soon as I could. Ron told me that they were opening a new division and wanted to talk with me about a job. And they were going to be in Chicago the very next day!

The following morning I met with Ron and his colleagues, had a fantastic interview, and got the job! A few short weeks later, I was in New York, working for my favorite designers, wearing clothes that I loved, and most importantly, I now had a mentor in Ron Smith who taught me all he knew about design and marketing, essentially launching my creative career.

There’s a big lesson in this story, and it’s best summed up by Joseph Campbell, who said:

Follow your bliss and the universe will open doors where there were only walls.

The above is a transcript of my first Toastmasters speech:
Competent Communicators Speech #1: The Icebreaker.

Mind map for the Speech: 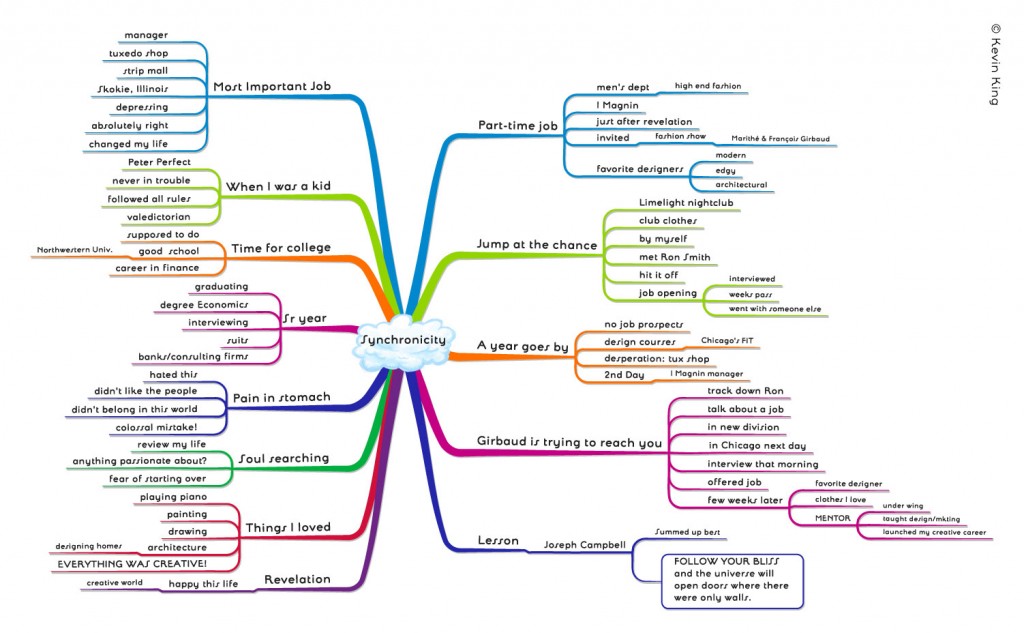